An immunity agreement is a deal with the Crown to refrain from fully prosecuting person (likely an unsavoury character) in exchange for information, assistance, testimony or other forms of cooperation. 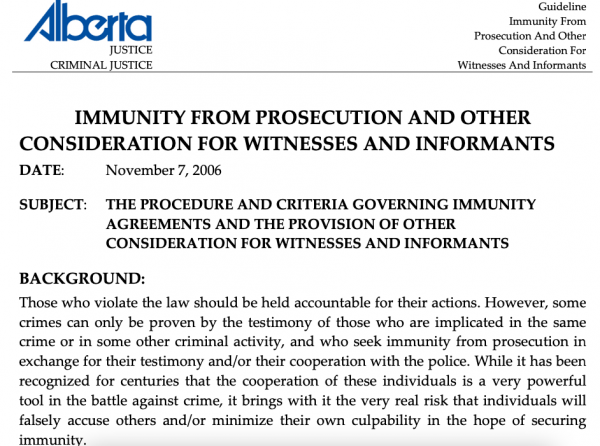 Alberta Justice has a guideline with respect to immunity agreements. The guideline purports to establish a procedure to follow when an immunity agreement is sought and the criteria for determining whether one will be granted. According to the policy, immunity agreements are the “exception” not the norm. They must be authorized by the Assistant Deputy Minister (Criminal Justice) and generally are only considered in serious cases where the cooperation is credible and reliable.

There are dangers to the Crown in relying on witnesses who are granted immunity – especially immunity from serious charges. For instance, the common law recognizes that special jury instructions or cautions apply to immunity witnesses. This is called a “Vetrovec warning” – named after the case R. v. Vetrovec. Vetrovec warnings apply to disreputable or unsavoury witnesses.  The way to think about the credibility and reliability of an immunity witness is to simply imagine the extent of the benefit conferred in exchange for their cooperation. The greater the benefit, the more likely their cooperation is self serving.

In the experience of this Calgary criminal lawyer, it is extremely rare for the Crown to rely on witnesses who are granted “formal” immunity. While is unusual to encounter actual immunity agreements, it is not unusual for the police and prosecution to informally decline to prosecute unsavoury witnesses in exchange for their testimony. In some respects, this is a more dangerous and potentially insidious kind of immunity; for it is more difficult for defence counsel to attack the witness as unsavoury when immunity is only suspected (even highly suspected) but cannot be proven.

One such example is the case of R. v. Mamouni and Gambila.  In that case, it was very clear that the Crown had conferred a massive sentencing benefit to a clearly unsavoury witness.  In the opinion of this defence lawyer, the informal immunity extended to include a half-hearted, weakly argued and disingenuous appeal, designed to leave the impression that the witness had not received actual immunity.  Of course, this is only the strongly suspicion of this Calgary criminal lawyer.

If you have been charged with any criminal offence call  David Chow.  He is one of a number of Calgary criminal lawyers who offers a a free consultation.