Taxing By Tickets in a Time of Crisis

Taxing By Tickets in a Time of Crisis

I recently posted on the topic of potentially unethical and undemocratic opportunism by the Trudeau Government.  As I said, the coronavirus pandemic should not be used as a tool for the opportunistic.

Since writing that article, I discovered a recent story published by the Calgary Herald that arguably highlights opportunistic and procedurally shady behaviour on the part of the City of Calgary Police and the City of Calgary.  I suspect taxing by tickets and convicting in absence is occurring in jurisdictions across the Province.

Specifically, while Canadians struggle in the grips of a global health crisis, the City of Calgary Police (CPS)  have continued their program of generating revenue by ticket enforcement.  Baked into continued ticket enforcement, the City of Calgary prosecutions services, with the assistance of the Alberta Courts have been convicting people "in absence" for failing to speak to their traffic ticket at the Calgary Court Centre. In my opinion, this is a form of abusive State conduct whereby our local Government continues to collect taxes by ticket enforcement -- in most cases likely for relatively minor infractions --  and then opportunistically relies on a crisis situation to marginalize due process.   The net effect is that the City's program will generate future revenue from the wallets of already financially stressed Albertans.

At the outset, I don’t want to be read to say that the police should stop enforcing traffic infractions.  Certainly, as our street constables patrol City communities, they will encounter persons operating a motor vehicle in a clearly unsafe manner.  These people deserve to be ticketed. My concerns arise where police are generating revenue on the basis of minor, marginal or questionable traffic violations, such as those intended for more pure revenue generation purposes than public safety.

This is a common speed enforcement zone in the City of Calgary.  I know it well.  Indeed, there is a peace officer catching a snooze in an unmarked police vehicle several yards west of  14th Street bridge just about every day.  This stretch of roadway, spanning from 14th Street to Shaganappi Trail, is a fertile revenue generation zone, packed with speed enforcement cameras, unmarked photo radar units and patrol cars.

Anybody who has driven this stretch of road knows that the speed limit changes every couple of blocks. Once passed 14thStreet NW the speed limit transitions from 50 (by the CBC building) to 70 (just prior to Crowchild Trail).  The photoradar unit typically setup a short distance passed the 14th Street bridge is parked to capture drivers speeding up towards the 70km/hour transition. I am aware that the camera will snap and deliver a speeding ticket for persons travelling at speeds as low as 62km/hour. How do I know this? Well, because I have received and paid for such a ticket.

Now, the stretch of highway on Memorial Drive beyond this point is packed with additional, arguably intentionally created speed traps; for as the speed transitions from 50 – 70km/hour between 14th Street and Crowchild Trail, it then transitions again to 60km/hour (a few blocks after Crowchild Trial), to 50km/hour just beyond Kensington Road, back to 60km/hour and then back to 50km/hour.  It is not unusual for a another officer to be napping in a photoradar unit parked on the northside of the street, a couple of blocks into the area where Memorial Drive becomes Bowness Road.  Of course, there are mounted cameras along this road as well, including a prolific revenue generator at Shaganappi Trail.

In my view, if the police want to monitor for public safety, by all means do so. But to snap tickets to deplete the wallets of already depleted citizens, I do not agree.

To reiterate, I am not arguing that Calgarians should be allowed to speed in a time of crisis.  What I am suggesting, however, is that marginal ticket enforcement, especially in locations where it appears the City of Calgary has constructed a ticket enforcement trap, should be relaxed in this time of crisis. To my mind, snapping a photograph of a driver speeding up towards the 70km/hour transition is nothing short of a form of purely armed tax collection from people who may be having trouble putting food on the table.

The City of Calgary Police are not the only police department in the business  of generating revenue from the wallets of already financially strapped Albertans.

On March 30th, 2020 I watched the Cochrane RCMP light-up and ticket a fellow who came to a staggered-stop prior to making a right-hand turn from James Walker Trail onto Highway 22 in Cochrane, Alberta. 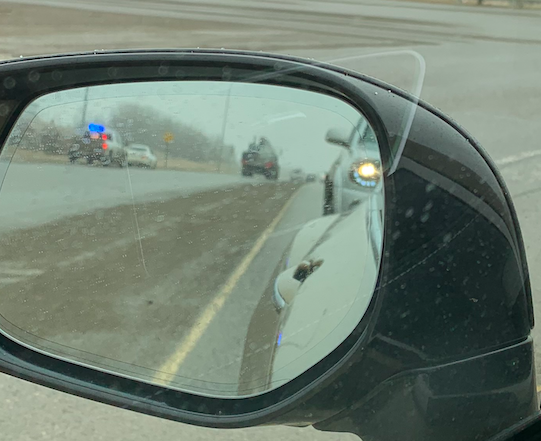 There was nothing unsafe about the man’s driving. Unfortunately for this driver, a police officer was watching and waiting to pounce on him at a location known-by some for revenue generating traffic stops.

I am of the opinion that this motorist’s driving presented absolutely NO THREAT to public safety. The officer was simply engaged in the kind of low hanging fruit traffic enforcement that has become commonplace in our communities.

The question is: if the police are truly part of “the community” and our Governments – municipal, provincial and federal – are here "to help" Canadians in a time of great need, how does it help to hit citizens in their wallet for nothing more than marginal, minor and/or questionable traffic infractions?  Isn’t it presently more important to ensure that every family can pay their bills and put food on the table?

A recent story published by the Calgary Herald suggests that when it comes to ticket revenue generation, the City of Calgary is prepared to take advantage of COVID-19 to fill City coffers.

As reported, despite pleas to the public to social distance, stay home and avoid cluster-zones – such as the Calgary Court Centre – City of Calgary Prosecution Services with the Assistance of the Alberta Courts have been convicting citizens in absentia for failing to attend a Justice of the Peace counter.

Important to this discussion is the fact that the Provincial Court of Alberta has made announcements relating to court closures, to include limiting appearances to urgent matters only.  An urgent matter includes a bail hearing, a sentencing where the accused could be released from custody, or other matters such as speaking to conditions of release that prevent people engaging or rejoining their family.  Can anybody reasonably say that speaking to a traffic ticket is of such a priority that due process should be  ignored in favour of ensuring the collection of ticket revenue from Calgarians?

I suggest that the answer is a hard “no”; for speaking to a traffic infraction is not the kind of essential and immediately necessary undertaking to warrant a person’s appearance in potentially close-contact cluster-zones, such as the Calgary Court Centre.

Notwithstanding weeks of messaging about our civic responsibility to stay home and do our duty to help abate this health crisis, the City of Calgary hypocritically takes the position that speaking to traffic tickets at a counter is so urgent that citizens should risk exposure to a life-threatening disease or surrender due process and pay a fine. This is not a choice any citizen should have to make.

It is noteworthy that  just about every politician has been in the news media pleading with people to stay home. How are Albertans supposed to reasonably sift through mixed messages to stay away, especially when Alberta Justice has relaxed appearances for persons accused of committing criminal offences? Are traffic matters more serious and pressing than Criminal Code offences? Again, I suggest that the answer is clearly "no".

In the words of one Calgary criminal lawyer:

“The general public should know about this. We don’t want people coming down to the courthouse, but if you don’t contact us on tickets you’re gonna get convicted in absence, or a warrant’s gonna (be issued)”.

I agree that it is absolutely appalling that people are being convicted and fined in their absence.

In the view of this Alberta criminal lawyer, the City of Calgary and other jurisdictions are taking advantage of Albertans during a time of crisis.  This is the time when we need to come together as communities, not to abuse power by engaging in a kind of sleezy tax collection.

Police continue to use their authority to enforce trivial violations for the purpose of generating revenue. This clearly depletes the wallet of citizens who may be in a time of need. The City of Calgary cares so little about its citizens in a time of need that it is prepared to convict “in absence” those who have been encouraged to stay home.

On March 26th, 2020, Mayor Naheed Nenshi announced that the City of Calgary would be "helping citizens" by deferring utility bill payments to the end of the year.

In my view, rather than trying to convince Calgarians that he is helping them by initiating a “pay-me-now or pay-me-later” program, he should intercede to ensure that all Calgarians are, at the very least, afforded due process and not further victimized by a policy convicting in absence at a time when all people must, by necessity, be absent.

This is not the time for opportunism.  We all need to do our part.

Combing the Internet for Calgary criminal lawyers to help with your case?  If you have been charged with any criminal or regulatory offence, Call David Chow for a free consultation.