SafeRoads Alberta: Closed for the Holidays

SafeRoads Alberta: Closed for the Holidays

saferoads closed for the holidays

No new business, only open for three weeks, could could close for an extended holiday -- that is, unless it's funded by the taxpayer.

On December 1st, 2020 the Alberta Government initiated its SafeRoads program through the newly enacted Provincial Administrative Penalties Act 2020 (PAPA 2020).  By operation of this Act and its associated regulations, such as the Provincial Administrative Penalties Act Regulation (PAPAR) police are given vast discretionary authority to deal with alleged impaired drivers. The Government, through the use of paper mache administrative procedure has:

I have criticized this new law.

Having now dealt with several cases, my new criticism is with the system itself. Simply, it is unreliable and in many cases, does not work. Worse, at a critical time after the Government has unveiled its new system -- indeed, a time where any reasonable person would worry that such a new program might have some kinks -- the Alberta Government and SafeRoads Alberta has taken a 10 day holiday.

Practically, a major problem has arisen in 3 of 5 cases that I have handled. Specifically, the Government mandates that all disputes must filed via the SafeRoads Portal within 7 days of the incident. However, there is a problem: in many cases, when a party filing the dispute inputs the information requested into the SafeRoads Portal for the purpose of filing their dispute, the contravention is not found and the dispute cannot be registered.   At present, the Government appears too have now availed itself of a more sinister kind of resistance to those wishing to fight their immediate roadside sanctions: simply, don’t allow them to file their dispute at all. 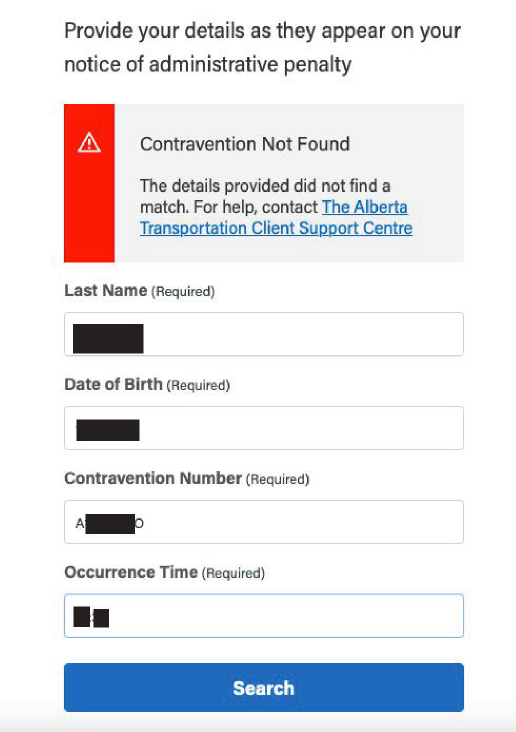 I am aware that some with the Government are justifying the problems as nothing more than wrinkles that need to be ironed out. I cannot disagree with this. However, what I take umbrage with is closing for the holidays when wrinkles can reasonably be expected. The question is: how many people have been dissuaded by this malfunctioning, wrinkled and presently negligent system?

It is worth noting that according to the law, if requested, SafeRoads must schedule a hearing within 21 days of filing the dispute; meaning that every day of delay in filing a dispute translates into delay in scheduling the hearing.  Remember, for some people – such as those with jobs and family who rely on a motor vehicle – each day counts.  For some, every day without a motor vehicle is a day they cannot put food on the table.

no service over the holiday

Of course, unlike private business who cannot afford to voluntarily shutter doors for extended holidays, the Government has closed its offices until January 4th, 2020.  SafeRoads Alberta -- a Government department -- has followed suit. In my view, this department needed to stay open.

I can tell you from first hand experience that I attempted to file an IRS dispute on December 24th, 2020 -- the sixth day of a seven day timeline -- only to be denied because the contravention could not be found. I followed-up with SafeRoads support only to be told that their “Support Centre” was closed from December 24th, 2020 – January 4th, 2021.  Yes, I said it! SafeRoads Support closed for 10 days. This department has only open for just a little over three-weeks at the time of this extended holiday.

Due to problems with the system, my client’s dispute could not be filed within 7 days and could not be immediately scheduled for hearing.  At present, I am not sure when this hearing will take place.

Police have been issuing roadside sanctions over the holidays. In fact, I am aware of people who have been issued Roadside Sanctions on Christmas day. I am aware of at least one case where an IRS contravention, issued over Christmas,  could not be found and thus the dispute could not be filed. To date, the dispute still has not appeared on the SafeRoads Portal. This means that this motorist has had her vehicle seized and driving privileges suspended, but cannot dispute the imposition of sanctions.

So let me get this straight: police are empowered to issue immediate roadside sanctions over the holidays, but the people impacted by the sanction are unable to exercise their already attenuated right to file a dispute and fight their case?

I am sure it comes as little solace to people who lost their license, had their vehicle seized, potentially lost their job and their ability to support their family, that they cannot file their dispute because the electronic system (the SafeRoads Portal) is not functional. I am sure it comes as little comfort that the department tasked with accepting and hearing their dispute is currently resting nicely at home, sipping a cup of Egg-Nog while they are trying without success to file a grievance.

In the mind of this Alberta roadside sanctions lawyer, this is simply unfair.

In my opinion, if the Government is going to legislate a system capable of injuring the citizens it serves, it is important that it make every reasonable effort to ensure the system is functioning properly. The Government should not treat the people injured by its law enforcement initiative as Guinea Pigs and certainly should not take a holiday within a period when wrinkles in the system can reasonably be expected.  No reasonable business, let alone one like this, should operate this way.

SafeRoads is a novel Alberta Government program. Any competent business would not close its doors for holidays within a couple of weeks of opening.  Why should the Government be any different?  As taxpayer are well aware, however, only Government industry gets away with this.

The COVID-19 pandemic has forced many private businesses to close.  In every respect, these private businesses are doing their part to help slow or stop the spread of this dangerous disease.  Of all people in Canada, the only people with job and paycheque security are those employed by the taxpayer (the Government) -- yet many pure taxpayers who keep this Country afloat -- who pay Crowns, Police, Politicians and all Government service -- are falling deeper into debt, having trouble putting food on the table and are at risk of losing their jobs, businesses and homes. Perhaps they have already suffered these losses.

I make no comment about the efficacy of immediate roadside sanctions in combatting impaired driving. As I have previously stated, perhaps it will have the desired effect. The question is, at what cost?

Add to the COVID-19 economic fallout, the potentially unfair impact of immediate roadside sanctions on not only the targeted motorist, but on his or her family.  It may be that the targeted motorist deserved a roadside sanction (or worse, a criminal impaired driving charge); however, it may be that they didn't.  For those who may not have been deserving or those who were improperly investigated, over this Holiday Season, you can take comfort in the fact that you may not be able to file your grievance because the Government system that has injured you has closed for the holidays.

As a pure taxpayer, I personally find this offensive.

David Chow is a full service Calgary criminal lawyer with over two-decades of real experience litigating impaired driving cases. David is a former Crown Prosecutor with Alberta Justice, who has been a criminal defence lawyer in Calgary since 2005.  Though SafeRoads Alberta has been operating for less than a month, David Chow has handled several immediate roadside sanction reviews. If you need a roadside sanctions lawyer in Alberta, call for a free consultation.